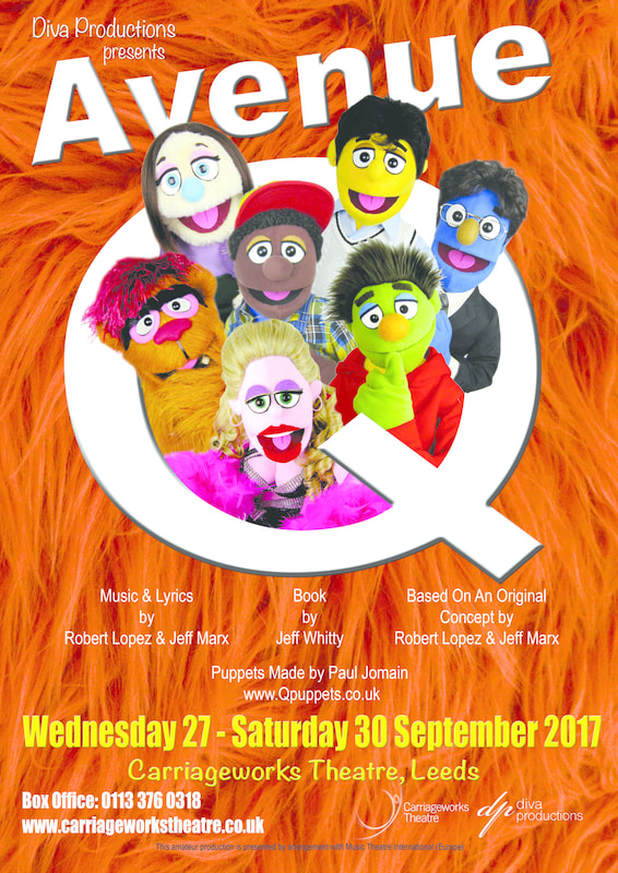 
I have to preface this review by saying that my husband and I saw Avenue Q in New York on an off-Broadway performance and so we were equal parts excited and sceptical about this evening’s performance by Diva Productions - could it really compete?!
If you are unacquainted with the hilarious musical that is Avenue Q, where have you been?! Not for the prudish or faint of heart, Avenue Q is like Sesame Street meets Rent after dark. Following a cast of characters (a mixture of humans and Muppet-style puppets) in their run-down apartment block as new resident Princeton played by Chris Moss, searches for his ‘purpose’. With songs about homosexuality, racism, and er… puppet coitus(!) there are as many cringe moments as real belly laughs.

Some of the characters, such as Trekkie Monster, are played by two puppeteers at once (perfectly in sync - no mean feat), whereas others have the same person controlling the puppet and providing the voice. The real testimony to whether a performance of Avenue Q is successful is if the audience barely notices the actors and concentrates entirely on their puppet counterparts and for the most part, in this performance that was the case. As I was reviewing, I think I paid a little more attention to the humans behind the felt than the rest of the audience and I did feel that occasionally Kate Monster (Played by Anna Potton) could have been a little more animated to keep the focus on herself- but what a voice!

In fact, the vocals of this production were incredible (from someone who listens to the soundtrack on the regular!), individually and as an ensemble. Even when the songs were vulgar and full of foul language, it was still aurally beautiful! Enunciation and clarity is so important in a musical like this and judging by the tears from the guy laughing next to me, no words were lost on the audience! Musical Director Adam Boniface should be proud!

Luke Gillingham was the standout for me, as he played Rod (a closeted Republican with a crush on his roommate and best friend, the adorable Nicky played excellently by James Sidgwick) and Trekkie (a lovable perverted millionaire) - two incredibly opposite characters who were brought to life flawlessly by Gillingham. I have no idea how he did it!

In the American version, Gary Coleman was played by a black woman, and when I saw that he was going to be a puppet voiced by a white woman in this version I was pretty sceptical but oh my God was I wrong! Suze Trim was unbelievable! I would go as far as to say that her version of Gary outperformed the Broadway version we had seen as she took a bit-part character and gave him the most amazing stage presence. I found myself wanting Gary to be in every scene!

The use of multimedia screens showing short clips a la Sesame Street was a hilarious touch, and the audience were very appreciative of the odd change in lyrics to include local interests (unless someone really did put a Leeds football season ticket in the money hat!).
If you aren’t into innuendos (or in some cases, quite graphic descriptions!), bad language and tongue-in-cheek comments, there is a chance that this show isn’t for you and you won’t enjoy it. If, however, you have a bit of a dark sense of humour, I cannot see how you would not be able to fall in love with this production of Avenue Q. Mixed into the hilarious (and sometimes silly plot points) there are some important conversions being had about love, racism, the treatment of minorities (in this case, monsters) and the meaning of life - deep stuff for a show starring 90% puppets.

This is a musical for the Millennial generation or those of us who left University thinking we would ‘make a difference to the human race’, as Princeton sings, and are now left jaded and cynical. But hey - it’s just Schadenfreude - making people glad that they’re not you!

Director Andrew Ashley and Assistant Director Andy Fretwell and the rest of the team really deserved the standing ovation they received - even with knowing the plot, jokes and songs, I still laughed - a lot! The perfect cure for the end-of-summer blues!

Robert Lopez and Jeff Marx’s Avenue Q is famed for its devilish take on children’s puppetry and Diva Productions definitely deliver the laughs with their take on the show. With book by Jeff Whitty, Avenue Q boasts quick fire comedy, visual gags and a delightfully warped take on the blindly boppy world of kids’ puppetry. The show follows the lives of Princeton, a newbie to Avenue Q, complete with all the naivety and laughable optimism that comes with finding your first apartment away from home, and Kate Monster, a highly strung romantic desperate for love but lacking in confidence. The premise is simple enough; the pair meet and embark on a journey of disappointment and self-discovery in which their friends contribute heavily as they navigate pivotal moments and the monotony of the daily grind. Along the way, there are plenty of songs to thrill, shock and delight; songs about coming out, racism, porn and regret – all performed before us by colourful, sweet puppet characters. The set-up is pretty genius, so it’s no surprise that the show has enjoyed great success on Broadway and in the West End.
With music and lyrics by Lopez and Marx, the songs of Avenue Q are infamously outrageous; few trigger subjects fail to make the cut and although the lyrics are designed to hike the eyebrows the the hairline, they also harbour some genuine sentimentality and a little sprinkling of wisdom for good measure. The vocal abilities of the cast in delivering these numbers is a key strength of this production; although the songs are not particularly vocally demanding, the ensemble produce some sweet harmonies. It has to be said that the sound demands of Avenue Q in this production are very sophisticated, with the cast singing in character and adopting various voices throughout the production.
Taking the format of Sesame Street (though rejecting any notion of direct connection), Avenue Q excels in manipulating the formula for the guilty laughs of grown-ups. Screens on either side of the stage spring to life with those simplistic animations and that classic sing-song approach to educating young people about life, but there’s always an adult-themed conclusion… It is that combination of jolly puppets in the stylings of cheesy children’s entertainment, brutal realism and pure smut which make Avenue Q such an alarmingly funny display of human experience and weakness. The Bad Idea Bears, played with painful and vindictive positivity by the exuberant Hayley Harris and Danny Smith, are a wonderful manifestation of human failure and their recurring appearances cause welcome chaos in the lives of the characters.
The puppeteering is skilled, with only a few moments in which cast members don’t quite keep pace with the action or stray from the eye line when interacting, but those moments are few and far between, making the puppeteering a vital strength which sets the whole production on a strong course towards success. It’s interesting to see how the cast bring their puppets to life; they only exist from the waist up, with some designed to be operated with lines from hands while others require two cast members to prop up a character and give them two functioning hands. The way the cast live the story alongside their puppet, providing facial expressions to bridge the gap between animated inanimate objects and feeling beings is fascinating to watch and beautifully showcases the capabilities of puppetry. As our protagonist Princeton, Chris Moss captures the naivety and the tragedy of the character well while Anna Potton plays the facial expression surrogate for all of Kate Monster’s experiences, making her performance impressive to watch. She voices Kate Monster with lashings of self-pity and plenty of straight laced anxiety while Moss voices Princeton as a gentle guy who can be a bit of a fool. The pair have good chemistry via their felt and fur characters, making the relationship sweet and comically doomed in turn.
Suźe Trim is striking as Gary Coleman but while she does a brilliant job with voicing him, that casting draws attention to the fact that there are no people of colour in the cast, which is incongruous and disappointing. That said, Trim’s performance is lively and full of conviction. James Sidgwick gives the impression of being an old hand with puppeteering as he characterises Nicky with heart and with ease; his voice painting the character as the lovable youngster with his foot for ever in his mouth. But it is Luke Gillingham, playing both Rod and Trekkie Monster, who takes the crown for diverse and brilliant puppeteering. His characters are worlds apart and his voice talents in channeling the gruff Trekkie Monster and the emotional, pitchy delivery as Rod are as distinctive among the cast as his puppets are among the puppet cast. Joining this puppet cast are Charlotte Spowage as Christmas Eve, a woman forcibly marrying her pathetic comedian boyfriend Brian (Dale Vaughan) who just can’t catch a break. I didn’t particularly connect with this pair although they interacted well with the puppet characters and ticked the box for following the Sesame Street style. The character of Christmas Eve provides another example of the lack of diversity in the cast, although I do realise the difficulties facing small companies. Spowage certainly gives the role a real kick and the character does undeniably get big laughs from the audience as the hen-pecking wife archetype.
With Andrew Ashley at the helm, this is a polished take on a modern abstract comedy classic and the cast deliver the punchlines brilliantly while characterising their puppets to engage and invite connection. It’s a lively, fun show with its tongue firmly in cheek. If you like a little outrageous humour and you’re in need of a new guilty pleasure, make this twisted take on children’s puppetry it.
★★★★

We are pleased to be working with the following companies on this production: