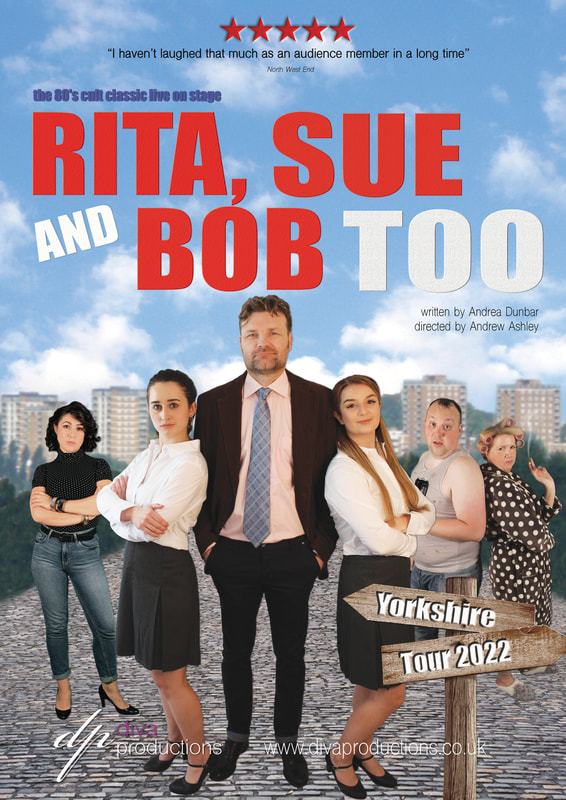 ​TICKETS ON SALE ACROSS ALL VENUES NOW

​
Rita, Sue and Bob Too is a twisted, dark and hilarious comedy drama that tells the story of Rita and Sue, two working class girls from a rundown council estate who are about to finish their final year at school. In their spare time, they earn money babysitting for married couple Bob and Michelle. Behind Michelle’s back, Bob embarks on an affair with both Rita and Sue, who take it in turns with him in his car in the countryside. It is only a matter of time before Michelle and Sue's parents finds out and when they do sparks most definitely fly!

Andrea Dunbar’s semi-autobiographical work is a funny, touching and vibrant play, full of wicked humour and is a stark snapshot of 1980s northern working-class life, under an increasingly repressive Tory government. In 1986, the play was adapted into a film of the same name, and attracted a cult following due to its intimate portrayal of ordinary people’s lives

"Theatrical Powerhouse*" Diva Productions (Chicago, The Sound Of Music, The Full Monty and the sell out Rita, Sue and Bob Too (2017) are proud to be presenting this iconic production live on stage across Yorkshire in Autumn 2020.
​
*An important update from Diva Productions - 19 March 2021

Due to the ongoing National issues with COVID19 and the relative uncertainty regarding the reopening of theatres and town halls across the country (despite the recent announcements made by the Government) we have made a decision to further postpone and reschedule our planned Yorkshire tour of Rita, Sue and Bob Too to 2022.

Whilst we are optimistic that theatres will be operating again by the end of this year, we believe this is the right thing to do for the safety and well being of our cast, crew and audiences. We very much look forward to welcoming everyone to see this hilarious show in October and November 2022 and believe we will be able to present the show without having to compromise any aspect of the production due to social distancing or other limiting factors. We are grateful of the continued support of the venues for enabling the changes to be made.

Existing customers with tickets will be notified by the venue of the rescheduled tour dates in due course.

We thank you for your understanding and we look forward to seeing you next year!