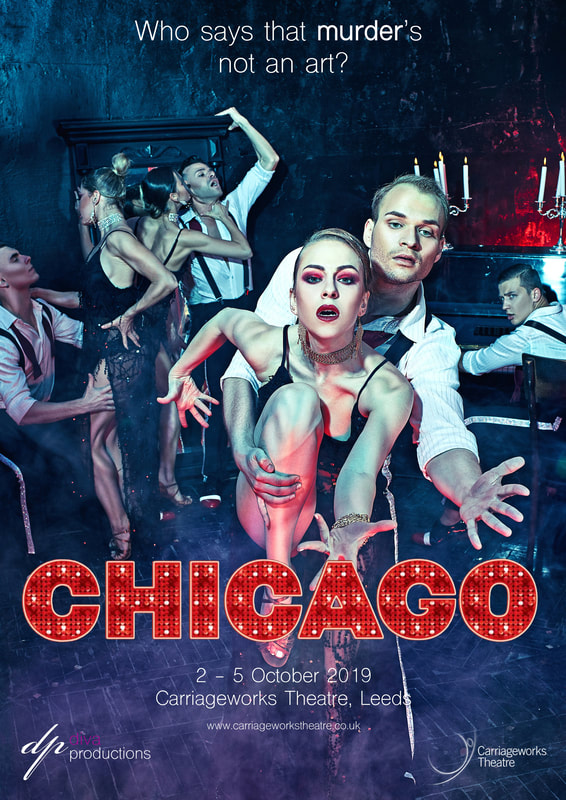 The sexiest, sassiest, longest running and most sophisticated Broadway musical in history, Chicago is a razzle dazzling and satirical look at fame, criminal justice, corruption and all that jazz! Set in the legendary city during the roaring jazz hot 20s, and based on real-life murders and trials, Chicago follows Roxie Hart, a wannabe vaudevillian star who murders her lover and is arrested, despite her attempts to convince her pushover husband, Amos, to lie for her. In the Cook County Jail, Roxie meets her hero, the famed double-murderess and nightclub performer Velma Kelly. When both acquire the same lawyer, the greedy and lustful superstar, Billy Flynn, tensions come to a head as they vie for the spotlight, both desperate for showbiz and to become the biggest celebrity criminal.

This dazzling Tony, Grammy, Olivier and Academy Award Winning musical continues to play to sold out audiences worldwide, and is Broadway's longest running musical in history. Featuring a sizzling score with the showstopping songs Razzle Dazzle, Cell Block Tango, All That Jazz and many more.
"Theatrical Powerhouse" Diva Productions (Joseph, Avenue Q, The Full Monty, The Sound Of Music and Rita, Sue and Bob Too) are proud to be presenting this musical spectacular and Bob Fosse masterpiece.
​

There’s no getting around it – ‘Chicago’ is an institution. The world’s longest running American musical and the West End’s longest running revival, it’s been seen by an estimated 31 million people, won six Tony awards, two Olivier awards and a Grammy. This week, the musically-minded people of Leeds have been treated to one of the most stunning interpretations of this iconic musical.

Diva Productions should be so proud of their production at the Carriageworks.
With the very experienced team of Andy Fretwell and Andrew Ashley (Producers), Direction by Andrew Ashley, Musical Direction by Jonathan Mitra and Choreography by Kimberley Baker, they had a smash-hit on their hands from the opening bars of music.

This show, set in the Roaring 20’s, needs a very high standard in all areas – it has lots of different themes – sex, slick comedy, big vocals and high kicks. By keeping faith with direction and choreography that has worked for years, you cannot fail and Diva came up to the mark and beyond. The look of the production also needs mentioning – the contemporary feel of costumes, hair and make-up added to a brilliant overall effect.

Add to the mix very talented principals; Charlotte Spowage (Velma Kelly) and Sophie Massa (Roxie Hart) gave brilliantly strong performances, with Dale Vaughan (Billy Flynn) the oily defence lawyer, equally confident in his role. Suze Trim (Mama Morton) had got the character just right – and I just loved that great wig!  Chris Moss (Amos Hart) drew the most sympathy from the audience, especially with his wistful solo ‘Mr Cellophane’. Aileen Stables gave an interesting performance with good comedy as ‘Mary Sunshine’. Kimberley’s choreography was so precise and strong (assisted by Emma Davies) - she certainly worked her cast hard, as shown by the Ensemble and Featured Roles – there was never a foot, flick of the hand or high kick out of place – fantastic!

Diva’s strength has always been on its technical side – professional lighting added so much to the performance, along with expert sound and props in keeping with the look of the show. I loved the band set on the stage and having to work as hard as the performers – the drummer deserved a medal, not a drum beat wrong!
Jonathan, as the Musical Director, had drawn out every vocal twist and turn of this very complex score completely in ‘harmony’ with the performers. It’s not often the MD has to act in a musical, but Jonathan can now add this on to his list of credits!

Once again, Diva gave a professional and first-rate production – it was good to have some ‘razzle-dazzle’ once again – judging by the audience’s reaction at the finale, they thought so to – we all danced and sang our way home, simply marvellous!

My sincere congratulations to you all!

For Wakefield-based Diva Productions, who were founded in 2013, a musical with the reputation of Chicago could have been a real challenge.

But in their latest production, the team face the test head on, taking the scandalous plot, lively music and raucous choreography to new heights.
The seminal musical, which tells the story of two women on trial for murder in 1920s Chicago, stars Sophie Massa (Footloose, Oliver, The Addams Family) as Roxie Hart, who finds herself behind bars after failing to convince her husband to take the blame for murder. Though not the most comfortable dancer, Massa’s voice is enviable, and gives an enthralling performance as a wannabe celebrity. But undoubtedly the star of the show is Charlotte Spowage (The Sound of Music, Avenue Q, Rita, Sue and Bob Too), whose Velma Kelly is as shrewd as she is seductive. Spowage is a natural performer, and embodies her character with enthusiasm. Her Cell Block Tango monologue, arguably one of the show’s most popular musical numbers, has all the talent and raw energy that would be expected from such a number. It is a vocal performance rivalled only by Suzé Trim (Our House, Hairspray, Little Shop of Horrors), whose Matron ‘Mama’ Morton  exudes stage presence - and has a voice to match. Dale Vaughan (The Sound of Music, Jesus Christ Superstar, Into the Woods) makes a sinfully convincing Billy Flynn, a defence attorney whose main priority is creating a media storm. He makes a perfect rival for Chris Moss (Avenue Q, Bat Boy The Musical, Legally Blonde the Musical), whose Amos Heart is both comedic and lovable, and quickly wins over the audience.

The main cast are supported by a 16-strong ensemble, comprised primarily of local talent. At the heart of the show, the tight-knit group show enthusiasm and skill, with only the occasional misstep. They are supported by Jonathan Mitra’s 11 piece band, who demonstrate barely a single falter through almost two solid hours of music. There are definitely times when the stage feels a little cramped, but the ensemble make good use of the space, providing solid support for the main cast, and each making the most of their own brief appearances. A notable member was Emma Hooker, whose performance as Hungarian Hunyak, an accused murderer, draw applause, and pity, from the audience. Minimal use of props and a lack of scenery lends itself to the show and makes for smooth transitions, but can sometimes make it difficult for the audience to keep up with the setting of the scene. A brilliant display of local talent, Chicago, by Diva Productions, runs at the Carriageworks Theatre, Leeds, until Saturday, October 5.

This amateur production of “Chicago” is presented by special arrangement with SAMUEL FRENCH LTD, a Concord Theatricals Company