The Full Monty
The Broadway Musical
Book by Terrence McNally, Music and Lyrics by David Yazbek 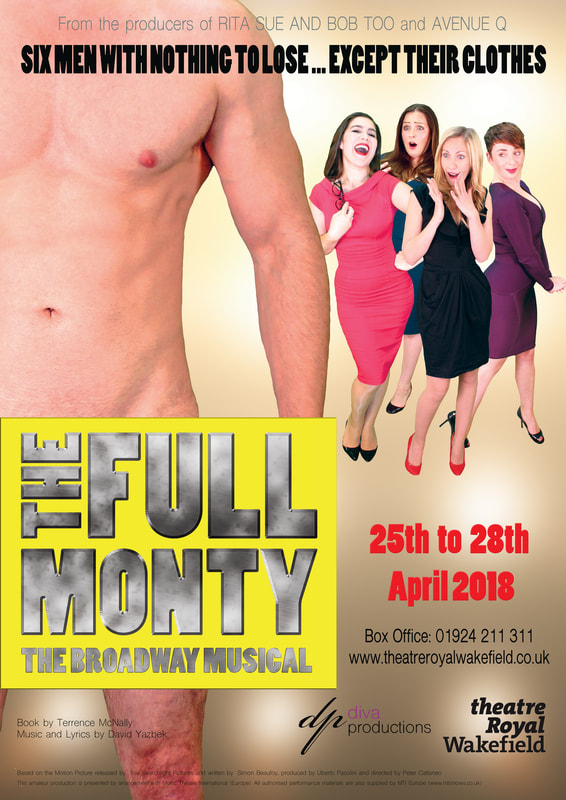 Based on the Motion Picture released by Fox Searchlight Pictures and written by Simon Beaufoy,
​produced by Umberto Pasolini and directed by Peter Cattaneo

Based on the cult hit film of the same name, The Full Monty, a ten-time Tony Award nominee, is filled with honest affection, engaging melodies and the most highly anticipated closing number of any show. The powerhouse team of Terrence McNally (Ragtime) and David Yazbek (Dirty Rotten Scoundrels) cook up a real crowd-pleaser that both entertains and grabs your heart.

While spying on their wives at a "Girls' Night Out," a group of unemployed steelworkers from Buffalo sees how much they enjoy watching male strippers. Jealous, out of work and feeling emasculated, the men come up with a bold and unclothed way to make some quick cash. In preparing, they find themselves extremely exposed; not merely physically but emotionally. As they conquer their fears, self-consciousness and prejudices, the men come to discover that they're stronger as a group, and the strength that they find in each other gives them the individual courage to "let it go."

The Full Monty is a story full of heart.  With a raucous mix of razor-sharp humour and toe-tapping pizzazz, this heartwarming, upbeat comedy is a must see!
​

This production simply blew me away with its artistry, talent and wit. When a musical is brilliantly directed, musically directed and choreographed, success is guaranteed. Add to the mix a company of actors and actresses, working as a team and cast correctly, you have a sure-fire winner!
The musical has had many years of success, for both professionals and amateurs. The story of unemployed steel workers trying to earn money by becoming male strippers and reinstating their masculinity doesn’t seem to have dated over the years. There has always been the confusion of the location of the piece – the film centred on Sheffield steel-workers but when it was developed for a stage musical, it centred on Buffalo, an industrial steel-based town in the U.S.A. Why? Well, the American production team got there first and contractually, it has to remain set that way.
The Director, Andrew Ashley and Producers Andrew Ashley and Andy Fretwell, had brought together an amazingly talented cast; Dale Vaughan played the lead, Jerry Lukowski with assured confidence, equally with James Sidgwick as Dave Buckatinsky, his (larger than life) best friend. Their rapport on stage was of professional standards. Danny Ryan Smith was a convincing and thoughtful Malcolm – only a trained dancer can make bad dancing convincing! Scott Worsfold, (Harold), Reggie Challenger (Horse), Joseph Mitchell (Ethan) completed the stripping line-up, all completely believable in their roles. On the night I attended, Connor White played Jerry’s son, Nathan with youthful talent and I am certain that the alternative Nathan, George North, would equally be as good. The girls in the show should have equal credit given in excellence – Charlotte Spowage as Georgie, Anna Potton (Vicki), Hayley Harris (Pam) Sarah Duce (Estelle), Rea Lawrenson (Susan) – and a spirited Wendy Chable as the old-time piano player, Jeanette. I have to make a special mention of Daniel Austwick as the ‘real’ stripper, Keno – certainly eye candy for the enthusiastic, mainly female, audience! They were all joined by other principals who all gave energetic and polished performances.

Music and vocals were in the very experienced hands of Adam Boniface, who with nine in the orchestra, provided excellent accompaniment – the sound balance was superb – I heard every singer clearly and it’s not often you can say that! Kimberly Baker had worked hard on the cast who were foot-perfect – and she had provided stunning routines, particularly in the ‘Michael Jordan’s Ball’ sequence
Andrew, the Director, was credited for the video content which was slick and added interest to the scenes – this is becoming a popular method of changing scenes and here, used to full advantage. The creative team were again, of the highest standard, under the wing of the Stage Manager, Becky Firth – brilliant set, lighting design and sound. I congratulate Julie Kidd (Costume) for well-conceived costumes – particularly, dare I say, the smashing underwear worn by the ladies at one point – matching the men’s interesting character underwear!
It seems I have run out of superlatives – I have seen ‘The Full Monty’ many times and I can honestly say, this production is the best on all fronts and exactly what audiences love and deserve.
My sincere congratulations to you all!
​
Christine Castle
NODA NE Regional Representative – District 9

"..Expectations were high, and Diva did not disappoint"

“The Full Monty” is the story of unemployed steel men who hit upon the unlikely idea of making a living by becoming strippers, even to the extent of ending up in their birthday suits before an audience of raucously enthusiastic paying customers. I love the film, but never felt moved to take any of several opportunities to see local theatre groups produce the slightly risqué stage version – until last week, that is. But it was with keen anticipation that I bowled up to Wakefield’s Opera House to see Diva Productions’ sizzling retelling of how six jobless guys set out to make some cash and, in the process, find out rather a lot about themselves and each other.
The stage show has been transplanted from Sheffield, Yorkshire to Buffalo in the American state of New York, though the storyline is largely faithful to that of the original film. The reason for my eager attendance is that Diva aren’t just your average community theatre group; the production values, as anyone would confirm who saw their “Avenue Q” in Leeds last year, together with the elite talent they can draw upon, are a cut above the rest. So, expectations were high, and Diva did not disappoint.
Clever use of video projections between scenes helped move the action along, the limitations of stage as compared to big screen were artfully overcome, and a brisk pace was maintained throughout. This show is not just about the central characters’ journey from hopeless unemployment and frustrated masculinity to a Chippendales-inspired cabaret act of barefaced cheek. It’s also concerned with several significant relationships in various stages of crisis, and how those issues are, more or less, resolved. The skill of Diva’s cast, director, musical director, choreographer and crew combined to meet this challenge, with the various comedy, angst and pathos elements of every relationship laid bare against a background of hang-ups being overcome as the lads’ performance night approaches.
Dale Vaughan and James Sidgewick, best friends Jerry and Dave, gave us the highly believable rapport of ordinary Joes who have worked together and are facing a shared crisis they can tackle only because of the strong bond between them. Their one-time foreman Harold (Scott Worsfold) is roped in, and further recruits are added in Malcolm (Danny Ryan Smith), “Horse” (Reggie Challenger) and Ethan (Joseph Mitchell). The transformation of these disparate characters into what becomes a very slick act is riotously amusing and intensely engaging all at once. Jerry’s estranged wife Pam is portrayed by Hayley Harris, who successfully brings out the exasperation of a woman for a feckless man she still loves but can’t face living with any more, while trying to provide a better life for their son Nathan (George North alternating with Connor White). Meanwhile, Dave’s wife Georgie (Charlotte Spowage) has to tackle her man’s insecurity issues to heal their marriage and help him overcome his demons. Anna Potton, as ex-foreman Harold’s wife Vicky, has been kept in the dark but ultimately supports the husband who had been too ashamed to admit he’d lost his job. It was all admirably gritty and authentic, reflecting great credit on the talented performers.
The true measure of any production is the ability of those in slightly smaller roles; Jonathan Cannon as Reg, with his hilarious “Half Monty”, and Wendy Chable, as the brassy accompanist Jeanette, of the devastating one-liners, emphasised with their brilliant cameos that this production is all about strength in depth. Each performer contributes in full to a show that would do justice to many a professional company, with the first night audience reaction providing an overwhelmingly positive verdict.
Watch out for further Diva Productions shows locally – you will not be disappointed.

​
SHOWTIME ON SUNDAY REVIEW
YO1 Radio
​
"Something new and fresh ... not a dull moment throughout"

This was not only my first visit to the old building that is the Theatre Royal at Wakefield, but it was my first time watching a Diva Productions show. After seeing The Full Monty - I really hope it is not my last. I have seen this show numerous of times and I got to the stage where I was fed up with the same old direction, setting and lighting and it was starting to grind on me. Thank you to Director Andrew Ashley for bringing something new and fresh.
Jamie Hudson's lighting design would put any LGBT Pride concert to shame - it was rainbow upon rainbow of colour from washes, to moving heads to up lighting LED's - it was a feast of technicolor. Tom Brancker did a great job with the sound as you could hear EVERYONE in this show and so many amateur groups get their sound wrong.  Adam Boniface and his orchestra were excellent they sounded amazing and made this score come to life; they were not too loud either they really complemented the cast.
Talking of the cast - wow, what a great bunch. Dale Vaughan was top notch as Jerry and he was assisted just as well by James Sidgwick as Dave. I really liked Danny Ryan Smith as Malcolm once he started to sing and we could hear his voice - he should have had his hair down throughout (in my opinion). Scott Worsfold was a good strong Harold and Reggie Challenger kept up the pace as Noah. I really liked Joseph Mitchell as Ethan.  The whole company pulled together and worked well - there was not a dull moment throughout. I thoroughly enjoyed Wendy Chabie as Jeanette - I really found her acting and character to be very a strong portrayal of the late Debbie Reynolds. Her mannerisms, styling and voice just seemed to hit a chord with Debbie's.  George North was suitably cast as the son Nathan and it shows that there is a member of the future companies for Diva to keep an eye on. Anna Potton was quirky as Vicky and Hayley Harris was strong as Pam.
Overall I thoroughly enjoyed this punchy production of a musical that I thought had had its run of the amateur circuit - it was nice to see it resurrected in such a strong and delightful way. Well done you set of DIVAS and I look forward to the next.

We are proud to have worked with the following companies on this production: