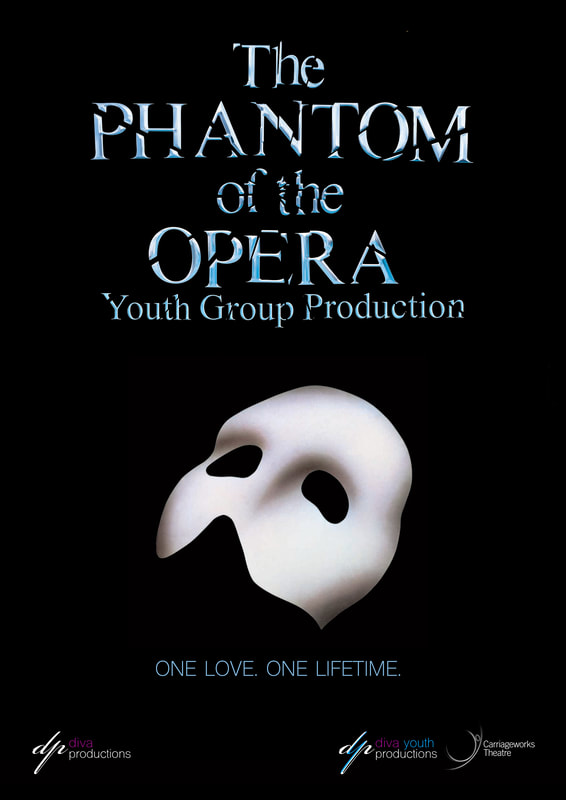 The Phantom of the Opera tells the story of a masked figure who lurks beneath the catacombs of the Paris Opera House, exercising a reign of terror over all who inhabit it. He falls madly in love with an innocent young soprano, Christine, and devotes himself to creating a new star by nurturing her extraordinary talents and by employing all of the devious methods at his command.
​
Andrew Lloyd Webber’s enthralling score includes “Think of Me,” “Angel of Music,” “‘Music of the Night,” “All I Ask of You,” “Masquerade” and, of course the famous title song.
​

NODA SHOW REPORT
Carriageworks Theatre,  Thursday 6 June 2019
"An amazing theatrical experience. The whole audience rose to its feet at the finale, completely blown away by the evening."

I must confess that when I first heard certain rights holders were releasing some of their popular and famous musicals to be performed by youth musical groups, I was sceptical. After all, these particular musicals have been on The West End and Broadway stages for many years, so why not release them to all amateur groups and not just youth? However, after seeing Diva's spectacular production of 'Phantom of the Opera' last night, my question has changed to - 'why not' - for here was theatre at it's best and I kept having to remind myself this was indeed a youth production!

Once again, Diva Productions have produced a piece of quite remarkable theatre. In the very talented hands of the producers, Andrew Ashley and Andy Fretwell, the Carriageworks Theatre came alive with the fabulous score and story of the ghostly Phantom and his mesmeric hold over the young soprano, Christine Daae and the company of players at the Opera House in Paris. This musical relies on atmospheric settings and strong vocals from the whole company.
I make special mention of the three main principals - Aimee Good, as 'Christine', was absolutely superb - her mastery of the score, her clear vocals and diction, belied her youth - she would not have been out of place in a professional production. Jordan Wright as the 'Phantom' was equally of a very high standard. His portrayal of this much-maligned character was again mature and vocally superb. Callum Convery as 'Raoul', was easily an equal partner, especially in his rendition of 'All I ask of you' with Christine - always hard to deliver such a well-known song, but he nailed it.

The Director, Andrew Ashley, had once again, rehearsed his cast superbly - there wasn't a weak link amongst the featured roles, the ensemble and the dancers. His use of video and lighting created dynamic sets and exciting lighting - so very contemporary and definitely the way forward at this time.

The orchestra, situated behind the stage, was excellent, under the expert guidance of Jonathan Mitra - he had obviously worked very hard on all the cast to ensure pitch-perfect singing and perfect diction. This was enhanced by effective sound, care of Tom Brancker - not easy in this theatre. Choreography and movement were excellently created by Kimberley Baker - how wonderful to see pointe work on stage again!

The attention to detail did not end there - effective costumes by Molly Limpet, a high standard in hairstyling and make-up, correct for the period and well-sourced props, all combined to make this a first-rate production. I must also mention the Stage crew, who had to work at lightning speed to move furniture from each setting - and the 'boat' in which the Phantom takes Christine to his liar underground was truly magical!

I seem to be running out of superlatives for this review, but every word is a true reflection of an amazing theatrical experience. The whole audience rose to its feet at the finale, completely blown away by the evening.

Having first seen this show 30 years ago (and subsequently over the years) in the West End, it was wonderful to revisit it in Leeds - I have always been of the opinion that this was Andrew Lloyd Webber's true masterpiece and he would have been thrilled to see this production in safe hands.
My sincere congratulations to you all!

We are pleased to have  worked with the following companies on this production:
Costumes designed and provided by